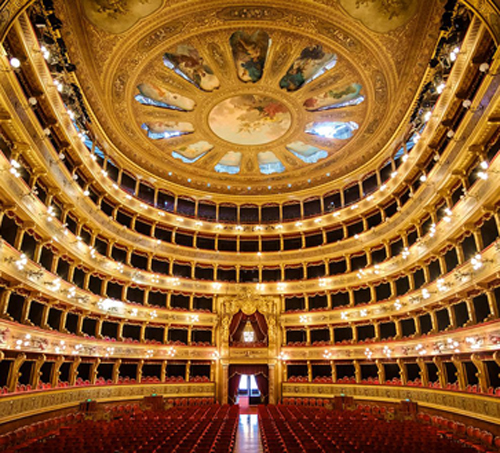 In the late eighties I had the pleasure of working with Giles Havergal at the Citizen’s Theatre and Welsh National Opera and Philip Prowse at Opera North in Leeds. The first performance with Philip was Tamburlaine which he directed and for which he designed a wonderful set complete with giant horse statues. 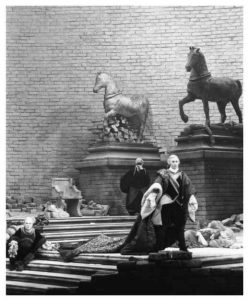 The second opera I lit for Philip was Daphne, again for Opera North in 1987, during the production period Philip had to go to London to supervise another opera and he left me to my own devices to light the finale transformation when Daphne is turned into a tree by Zeus at the behest of Apollo.

We had some very convincing hydraulic branches that wrapped around our heroine and we spent some time creating what I felt to be one of my most beautifully lit scenes. Slightly soft focus foliage gobos and split moonlight blue/light green colours with a tasty congo blue background to the whole sequence with just a soupcon of smoke.

Quite beautiful, even the lighting crew were so impressed that they got the flymen down from their gallery to have a look from out front.

We awaited Philip’s return with some pride in the work we had created in his absence.

Philip joined us at the production desk and I called the houselights out and waited a few minutes for our eyes to adjust and then we ran the sequence….

“What the bl##dy hell was that!” exclaimed our director “it’s supposed to be the saddest point in the opera, she’s dead for Christ sake, and you’ve turned it into a bl##dy oil painting!”

Out came the colour, off went the smoke and the congo blue turned to steel, he was quite right of course even though the crew had leapt to my defence bless them. 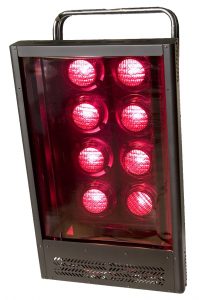 Another operatic venture saw me at the Arena in Birmingham’s NEC in 1991 lighting a concert for Jose Carreras, the budget was quite tight and I had lit the stage and orchestra with eight light molefays and 5kw fresnels all with LSD scrollers to reduce the amount of kit that we needed.

I was unable to attend the fit up and as I arrived I noticed that the crew were swapping the Xenon followspots front of house for arc gladiators. “what’s going on?” I enquired. “Jose’s management has complained about the fan noise from the spots” was the response.

Fek! What was I going to do about the fan noise from all the scrollers directly above his head!

As the concert unfolded I turned off the power to the scrollers during the songs and turned them back on during the applause to preset the colour changers for the next piece. I was using a Celco manual desk and as each scroller began to jam without the cooling from the fans I wound that particular light out on the rotary pot above each fader.

Fortunately as the concert continued Jose was singing solo with no choir or other singers so we did not need much light from above, until the finale which was a full on upbeat song with all his artists accompanying him. I thought what the hell and I wound up all the faders and as the song started revealed a quite beautiful rainbow of colours from all the jammed scrollers!

I was approached after the event by the Jose Carreras Society and asked to write a piece on how we had achieved the lighting for the concert which I did in all it’s brutal truth. I never heard back from Jose’s management though….. 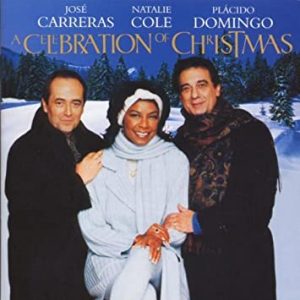 In 1995 our paths crossed again and this time sound was also a defining factor in what then occurred. The occasion was a Christmas Concert on New Year’s Eve in Vienna starring Domingo, Carreras and Natalie Cole.

Unbeknown to me they were to record the concert in digital Dolby for the first time and it became apparent that the system noise from our Vari-lites and High End scanners was unacceptable.

Theatre Projects had taken delivery of some relatively noise free VL5s and VL6s so I was quickly on the phone to dispatch some to Austria to replace our noisy moving lights, this was still one week before the concert so, aside from a day off on Christmas Day, we had a reasonable amount of time to sort it out.

When the truck arrived at the load-in bay I was standing with our Producer who had come down to see his latest investment. The driver opened the truck doors and our Producer opined “Well that’s certainly the quietest lighting rig I’ve ever seen” the truck was completely empty!

It transpired that after loading his truck the crew at TP had changed shifts and as the driver was taking a shower before his journey the new shift had unloaded his truck for him thinking it was arriving rather than dispatching.

In the rush the truck had actually been loaded with our few flight cases in the arrivals bay so they were not to know. The driver had then driven all the way to Vienna with an empty truck and a carnet for a load of around two dozen Vari-lites.

Another truck had already been dispatched when TP realised the error in the yard and the kit finally arrived on time and the concert was a great success with not a hint of fan noise on their precious sound track.

Apparently there was some to-ing and fro-ing with customs as they accused TP of selling the first load of fixtures in Austria.

1998 saw another venture into the world of Opera when Michael Bolton decided that his Secret Passion was singing opera. Michael had trained his voice for two years to perform his favourite arias at one of Sicily’s finest opera houses the Teatro Bellini in Catania.

If you have the chance to visit this part of the World there is a mediaeval castle in the town who’s moat is formed by the edge of the molten lava that Etna erupted. All the townsfolk took shelter in the castle and the lava poured down towards them stopping around 10 metres from the castle walls. Religions have been formed on less.

The live event was to be recorded for a DVD by TV director David Mallet and I was called upon to add some kit to the theatre’s rig and to light the concert which was being staged on the theatre’s own set for Rosencrantz and Guildenstern are Dead which was playing in their repertoire at the time.

The first performance was to an invited audience of local dignitaries and opera lovers and I have to say got quite a mixed reception as our rock/pop star sang phonetically from crib sheets on the floor beside him. We treated this as our broadcast dress rehearsal and the next night the second performance was in the main to Bolton’s loyal fans and was far better received. 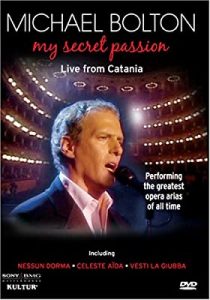 As the local populace were not able to obtain tickets for the event the Mayor of Catania had arranged for a large Jumbotron screen to be placed in the square in front of the theatre so the townsfolk could watch the performance live.

Our opening shot was from a steadicam in the square physically moving through the theatre’s front doors and foyer into the auditorium and ending up at the orchestra rail. To light the square outside I had hired a film ‘light in the sky’ basically a cherry picker with a 10k HMI on top, which we had parked outside some closed garage doors.

On the night of our recording the towns folk gathered and the first of our issues became apparent, the garage doors in front of which we had parked our light had opened and the guy in there was intent on selling pizzas. He was threatening to knock the picker over if we did not move it and the Mayor’s team moved in to sort this out presumably by paying him the worth of a few hundred pizzas. 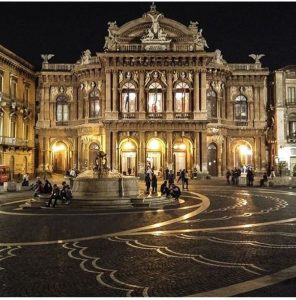 The next issue was a bit more serious. The Mayor decided that he wanted the streetlights in the square turned off so people could see his Jumbotron screen more clearly.

Not only were we relying on the street lighting to boost my ‘light in the sky’ for the opening shot but we realised that the local electrician had powered the broadcast OB truck from, yes you guessed it, a street light adjacent to the truck.

As this was primarily seen as a ‘lighting’ issue it was deemed by production that I should sort it out directly with the Mayor. Due to all the hassle with the Pizza man I had not had time to change into my show blacks and was sporting a rather loud floral shirt much to the amusement of the Mayor’s team.

I explained our issue to the Mayor and after much discussion he finally agreed to leave the street lights on though on one condition.

His demand was that someone who’s name was on the posters for the event which hung on the walls around the square should go on stage at the end of the performance and thank him personally for the success of the event. 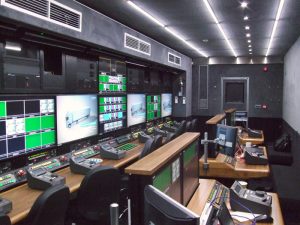 The obvious choice was our Director David so I ventured into the truck to explain his new role. “Tell him to bugger off I’ll be working” was his retort and the producers herded together in whispered discussion and then started glancing at me.

I happened to be stood next to a poster upon which was David’s credit as director and alongside was also the name of the lighting designer, me.

And so it came to pass that as Michael Bolton took his curtain calls at the end of the concert in his fine tuxedo he stepped behind the paged curtain to bring out his soprano Renee Fleming in a beautiful evening gown and stood next to a bloke in jeans and a floral beach shirt.

I think Michael barely recognised me as the lighting bloke and the look on his face as I joined him on stage to glorify the town’s Mayor really was a picture!

David gave me a recording of this magic moment later that night which was played over and over in the bar to everyone’s amusement but my own.

This is what renowned opera critic Robert Levine had to say of the event.

“Of course Michael Bolton–the world’s greatest mimic–should not be allowed within 200 yards of an opera house, what with his bluesy rasp instead of the round, pure sound associated with opera. But he’s no fool, and he has studied the languages (Italian and French), the idiom, and the texts of all of these well-known, oft-recorded arias.

He claims to love this music and I, for one, believe him. He hits all the notes–occasionally too hard and invariably with the wrong gloves–but he nails them all–including a very weird high C at the end of the Act One Boheme duet with Renee Fleming (of all people). What’s more (and better) is his emotional involvement in each aria–he sings off the words in a way that makes Bocelli, the other crossover pop star du jour – look like an imposter with a pretty voice, which is what he is.

To wrap up: This is a valiant try that can never, because of the equipment, be successful on operatic terms, but as an artistic endeavour- even one that ultimately fails – this is to be praised.”

Decide for yourselves, stay safe.