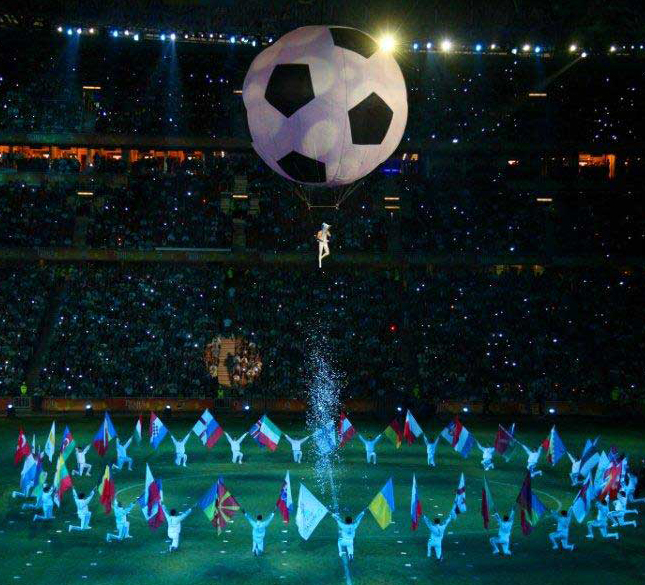 The Donbass Arena is one of the most remarkable stadiums that I have ever seen and was built in a previously desolate and very poor area of Donetsk which sadly, whilst we were in Sochi with the Paralympic Games in 2014, became a war zone. It really looks like a space ship that has landed in a coal field.

The stadium stands on the River Don and I remember that one of the producers had told me that at the start of World War II his father had stood on one side of the river with the Italian Army huddled in their great coats as winter approached whilst the Russian soldiers on the far bank were frolicking naked in the river and gesticulating at his Father and his fellows; a sign of things to come.

To celebrate the inauguration of the stadium in 2009 the evening’s entertainment included a football match between the Shakhtar FC players and some aliens who arrived by flying saucer, a mass choreography sequence of a football player scoring a goal by Doug Jack and a finale concert by Beyonce.

We installed a reasonably sized lighting and sound rig but I was very concerned about having enough sources to illuminate the mass choreography effectively so I told the producers from day one that we would have to have the stadium lights switched on for this sequence and the multi-camera shoot of it.

As the show approached it became apparent that the client had started a pretty big internet campaign to attract interest in the event and this included a statement that an International lighting designer was going to create a spectacular and breath taking moment for a Ukrainian superstar singer during the show.

The audience were to be given LED torches as part of their kit and at a particular point in the evening, the stadium would be plunged into complete darkness and the singer magically revealed in the middle of the pitch.

Of course this moment of magic was right after the mass choreography which I had explained would have to be lit by an additional level of light from the stadium flood lights.

As we sat down to wait for the crowd of 45,000 to take their seats it crossed my mind that the turning off process of the stadium lights might be worth timing as there was no central control in this brand new stadium.

For those not familiar with stadium lighting systems unless there is an overall control the banks of lights have to be switched off individually in the switch room and I had been given a man with a mobile phone to relay the off command to the electrician down below in the bowels of the building.

I called him over and explained in my best Ukrainian sign language that I wanted to turn the stadium lights off ten minutes before the show as a test, he seemed to understand and parked himself next to me, mobile in hand; so far so good.

At exactly ten minutes to show time I started my stopwatch and gave my new friend the international Lights Off cue with a cut-throat gesture, he put his mobile to his ear just as the MC took to the pitch and the crowd responded with a huge roar.

Ironically the MC was there to explain the magical lighting effect later in the show and the noise of excitement from people turning on 45,000 LED torches drowned out the mobile conversation going on beside me.

I was given the international upturned palms sign for ‘what can you do’ and my Ukrainian partner in darkness ran up the stairs and out of my view.

The stadium lights went off a while later and I stopped the watch, five and a half minutes. Bugger!

The show began on time and after the sight of hundreds of choreographed miners tap dancing on tin sheets and alien footballers taking one for the team my friend returned with a translator and a tale of lighting woe.

As soon as he had got out into the quiet of the concourse his mobile battery had gone flat, he had then borrowed a mobile from a hot dog vendor and had finally got through to his colleague to turn out the lights…very sorry…the show moved on.

This left me with a bit of a dilemma, with a fully charged mobile phone and relative quiet how long should I leave to pre-cue the blackout during Doug Jack’s massive footballer display so as not to ruin the goal at the end of it, and still not spoil the much advertised ‘magic LED effect’.

I picked the figure of one minute out of the air and sat with some trepidation as the cue approached.

We switched on the stadium lights without a hitch for the choreo sequence but between the verbal cue relay delay and the lamps warming up it was impossible to get any clues about what an accurate switch off time might be.

Doug’s mass choreography sequence unfolded before us and looked splendid with enough light all round for camera.

At 60 seconds before the end of the sequence when the player was to score a goal, heart in my mouth, I gave the cue “Blackout!”

55 seconds later nothing had happened, 56, 57, 58, just as I was turning to grab my coat and leg it… the goal was scored and the lights went out to a huge roar, bang on 60 seconds!

The show was deemed a great success and I had had yet another lesson in the dangerous business of relying on stadium lighting systems and their control; roll on more LED installs!

Associate lighting designer on the event was Nick Jones, our programmer was Tim Routledge, the gear was supplied by Agora with Nicola-Manuel Tallino as production electrician, Pat Brannon was Beyoncé’s lighting director and Marco Astarita was our production director. The show was produced and directed by Marco Balich, Annalisa Barbiera, Lida Castelli and their team for Filmmaster/Kevents.

Here is my recipe for a full English breakfast.

Toast some bread, remember to push down the lever; place some baked beans in the microwave until they start splattering the glass. Put some bacon, sausage and egg in a frying pan, read the paper; when the smoke alarm goes off, serve….lovely!

Fortunately for me Jennie does most of the cooking…