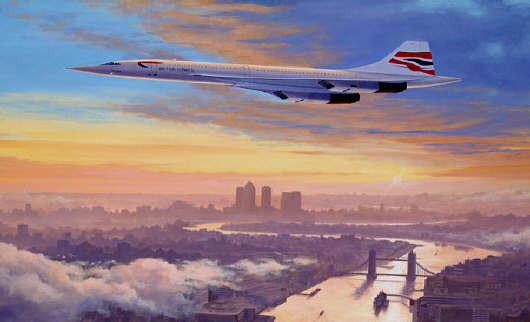 Dear Friends, Jennie has suggested that whilst I am stuck in the house I should put pen to paper and write down some of the rather curious and hopefully amusing experiences that I have witnessed in my forty years of lighting design. Get yourself a cup of tea or something stronger and we hope that you enjoy this little distraction. Concorde photo by Stephen Brown.

The year was 1986 and the occasion was the share price launch for the newly privatised British Airways, the site for the event was a floating stage in the middle of the Thames between the Royal Festival Hall on the South Bank and Cleopatra’s needle on the North. The light/water/laser show was produced by ICM International and was to be filmed for Broadcast by the BBC.

The barge we used as a stage had water fountains along the front edge backlit by a large array of par cans and in the centre was a steel globe construction with internal fixtures and tubes of light showing the routes that BA then operated around the globe. The following represents my personal recollection of events and any inaccuracies are mine and mine alone.

The show was memorable for several reasons the first of which was 1) a flyover by Concorde at night, I believe by test pilot Brian Trubshaw, 2) our use of the new Vari#Lite and 3) some original WWII searchlights rented in from our friends at the Royal Tournament, the British Army.

The first of these three elements was flown down the Thames at stall speed and ridiculously low by the pilot and, it was rumoured, in his cockpit were some of BA’s finest stewardesses, Fifty shades of the Concordia perhaps. I recall that Concorde was banned from ever pulling that particular stunt again.

We did discover that Concorde’s aircraft landing lights retracted into stowages in the wings when not in use and came on and swung forward for landing so we asked the flight engineer to continuously deploy and retract them during the flyover, proper moving lights, and ACLs to boot!

Speaking of moving lights we come to memorable element number two, our use of sixteen of the brand new VL1s. At that time Vari#Lite were so concerned and protective of their new fixtures that the technicians would service them inside the secrecy of black tents so that no-one could study the technology. They certainly would not want then to get wet.

As they were to be deployed in the middle of the globe on the barge to act as a core array of light effects and this was surrounded by water screens and jets we came up with the idea of joining two greenhouses together and placing them within that, like a Jewel inside our planet, thus keeping them dry; what could possibly go wrong?

The water fountain company, who will remain nameless to protect the guilty, were asked not to turn on any of their formidable array of jets until the greenhouse had been built and I left the site for the night as the greenhouse was being constructed.

The next morning I was greeted with the sight of sixteen VL1s hanging on a washing line improvised by VL Op Richard Knight and slowly nodding and spinning in a chase he had programmed so the fixtures moved like so many slow motion soggy dogs.

It transpired that whilst the water company had waited patiently for the greenhouse frame to be built as requested and the fixtures placed inside, in their enthusiasm they had not waited for it to be glazed. Richard’s ‘soggy dog’ chase eventually did the trick and dried them out and they did work rather well!

The Third and final memorable element was the four WW II Searchlights that we rented from Major Sir Michael Parker, Producer of the Royal Tournament, with whom we worked at that time along with the late great lighting designer Robert Ornbo. Robert was also made an Honorary military officer so that he could tell the soldiers amongst his crew what to do.

Major Michael and Officer Ornbo were responsible for some of the largest military events over several decades and I thoroughly recommend Sir Major Michael’s book ‘It’s All Going Terribly Wrong’. The title of his book comes from the words he used to respond to Her Majesty the Queen when asked by Her Majesty what was happening on one of his tattoos, “Oh how exciting!” being her immediate response.

These arc searchlights were amazing beasts with a lens of around two metres, caterpillar tracks and even a few bullet holes in the casing. They we very bright and I had placed them directly opposite the BBC’s cameras so that they would be clearly visible if we focused them directly towards and just above the camera lenses.

I also decided that they were so bright that they could perhaps be used with some red and blue gels, much to the amusement of the military officer in charge. “Never work Old Boy, we’ve tried that in the past and I will wager twenty pounds that you are wasting your time”.

“I do think I know what I am doing here Sir and although I cannot order the men to do this, as unlike officer Ornbo, I carry no rank, please bring the gels along to humour me” I requested and so one night we sat down together to try them out.

“Batman ask the men to put the blue gels in place” instructed our grinning Major. The Batman duly wound up his field telephone and issued the order to “Put on the blue gel!” The majestic white searchlight beams completely disappeared as though switched off.

The officer raised his eyebrows in that look of contempt that the British Amy officer inherits and retains for the imbeciles below him. “Batman ask the men to put the red gels in place”. The Batman duly wound up his field telephone and issued the order to “Put on the red gel!” The majestic white searchlight beams burst back into life and then once again were completely extinguished.

The Major said “Durham, I told you so” and pushed an upturned palm towards me presumably to receive his twenty pound note. “There is something not quite right here” I said and requested that we go look at the gels; the Batman was ordered to rustle up a jeep so that we could go and inspect our searchlight ’troops’.

“Bring the lighting chap the colours men” commanded the Major upon our arrival at the first searchlight which they promptly did for our inspection. Each gel frame was just over two metres square and as they had been stored horizontally in some form of barn for many years, both coloured gels were completely opaque with a solid layer of pigeon ‘guano’.

“Batman give the lighting chap twenty pounds!” said the Major and off he strode…….

Photo of a model pigeon as carried on Lancaster bombers during WWII. The homing pigeon would be released if the plane was downed in enemy territory with a note fastened to it’s leg with the co-ordinates of where the crew were in hiding. The pigeon would then fly back to it’s airbase and hopefully the crew could then be rescued.

The crew would often insist on carrying the same bird into battle for as long as they survived as a good luck token. A vestige of this memory is perhaps why pigeons were tolerated on military bases more than elsewhere and therefore had the opportunity to dump all over our gel, who really knows.

Please stay safe during our own current battle