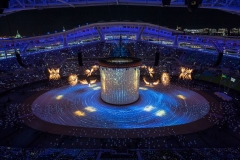 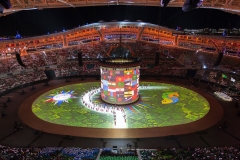 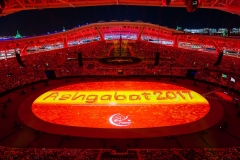 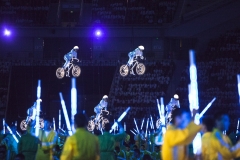 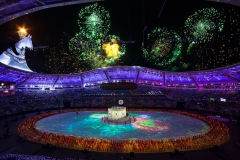 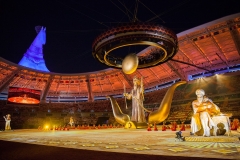 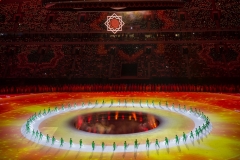 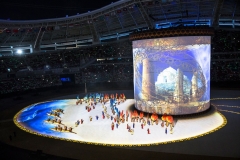 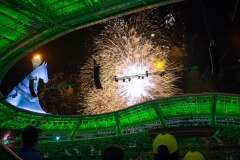 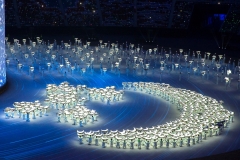 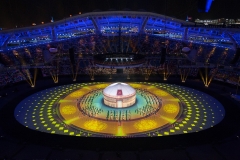 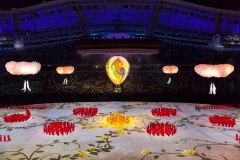 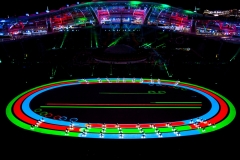 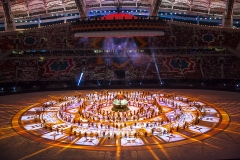 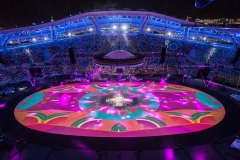 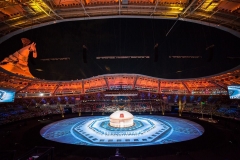 Lighting designer, Durham Marenghi used more than 830 Claypaky fixtures to deliver the two large-scale lighting designs for the Opening and Closing Ceremonies of the 2017 Asian Indoor and Martial Arts Games (AIMAG), held this year at the Olympic Stadium in Ashgabat, Turkmenistan.

The ceremonies, broadcast on the 17 and 27 of September to 57 countries worldwide, featured giant projection-mapped sets, pyrotechnics and sweeping light displays. For the Opening Ceremony, over 7,600 performers told the history of the Silk Road through music and dance, culminating in the lighting of the games’ ‘cauldron’ which burned throughout the 12-day event.

Lighting alongside projection is a delicate balancing act, as the light levels we use are very low, for AIMAG we rarely ventured above 350 lux. This means that the lights we used needed to be very accurate and optically sound to create the beautiful imagery required in these large-scale productions. Claypaky has shown time and time again that their optics and reliability are well suited to these challenges.

One of the largest challenges faced by Durham and his lighting team was illuminating the Opening Ceremony’s projection-mapped central riser, claimed to be the largest of its kind ever built. The riser, dressed in a specially fabricated material, doubled as a giant projection screen for key moments in the performance. These included the dramatic lighting of the AIMAG’s ‘cauldron’ by a torch bearer, riding a specially-trained Akhal-Teke horse, a revered symbol of Turkmenistan.

The central lift was in the middle of the field of play and it was a real challenge to not draw attention to the set build only a few metres underneath the pit edge when lighting the Field of Play around it. The reliability of our lighting fixtures to retain their focus information was key. In theatre, the drift of a degree may equate to a few inches, but in a stadium this can translate to a few metres, so the accuracy and focus retention of the fixtures was fundamental to creating this effect.

I used the Scenius Unico around the edge of the flown circular cylinder truss which became our only backlight position when the cylinder screen was deployed so accuracy and reliability were key advantages in this rather remote position. The Scenius Unico is a fantastic hybrid fixture as well as its framing system, the very high CRI of the OSRAM lamp in the fixture really makes the costumes and coloured scenery emerge.

“A show design is only ever as good as the team that realises it, and we were fortunate to have the team we did, and the show was quite spectacular because of it.” concludes Durham.